The lies we are told 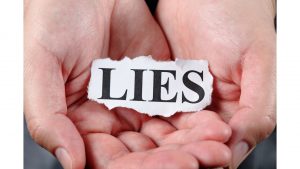 As a Doctor of Chiropractic and a supposed scientist (BS in Biology undergraduate degree), I am appalled and disturbed at the lies that are being perpetrated on society. The vast majority of society has endorsed and embraced unconditionally the newest meme: the plandemic fundamentalist movement. It all started innocently enough with being forced to wear a mask for a few weeks to supposedly flatten the curve.

We were lied to. Once madness like this is accepted as a consequence of a lie being repeated over and over, it becomes ‘truth’. Then, like obedient sheep, most people accepted the 6-foot rule. It is based on absolutely nothing. Why not 5 feet, 3 feet, etc.? You ride on a plane for hours crammed together and then they insist you social distance to exit. The lies we are told.

Speaking of nonsense, let’s talk about another meme invented; the super spreader. There is no factual basis for this concept and yet it has been accepted. Non-symptomatic (healthy) people are called into the fray as the enemy. In the land of disease, health is indeed a disease. The lies we are told. Do people really believe in this pseudoscience or do they think they are being taken care of by a benevolent surrogate father called the government? Most have meekly accepted the government’s decree to close businesses without so much as a whimper. People have no say and allow their freedom to be taken from them. Just surrender your economics and agree with their decisions and they will incentivize you with a few months of welfare money.

Speaking of incentives, you know you are in a hoax when institutions will lie openly about the cause of death to receive a bounty of up to $39,000 a body. Who incentivizes death? It’s done to turn straw into gold or make an illusion into truth, like burning witches at the stake or the earth is flat. The fundamentalists are in total and unchallenged control.

If there was ever a time to step up as a principled Chiropractor, it is now. Instead of participating in a silly, but deadly hoax, do the right thing: help as many people become healthy as possible. Healthier people create a healthier planet. How many times have we been led down this road and failed to recognize it? Stand up, step up, and become the Chiropractor you always wanted to be. You can make a HUGE difference, but it takes courage to do so!

Get the guidance you need to navigate these crazy times. Click on the button at the top of this page or call my office to set up a free consultation.

← Profiles in CourageWhat kind of choice are you making? →