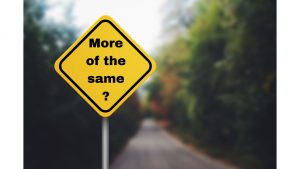 After 22 years of coaching, I have learned to read people’s behaviors. This sure helps speed up the process so nobody’s time is wasted. One behavior that I’ve noticed in successful and yet-to-be-successful Chiropractors is the speed of the decision-making process. And by the way, it’s not just in their offices.

When Chiropractors reach out to me, most are very familiar with me already. Either someone has referred them to me, they have spent a lot of time on my website, have read my books, or have watched my videos. They are usually ready to make the decision and they have their credit card ready. They need some heavy-duty, Miyagi-type care, they want it now, and they are all-in.

Recently I had two uncharacteristically calls from newly graduated Chiropractors who have found themselves in big trouble. One of the Chiropractors somehow managed to open her own practice but is hemorrhaging money. The other Chiropractor slaves as a $ 30,000-a-year associate. They are both stressed out, miserable, and heavy to be around. The factor that was missing was there was no connection, referral, or thread to me. They found me on the internet as they were kicking tires to get a low-cost, promise-you-the-moon type of online coach who would try to do the impossible.

They are both in debt around $350,000. I wish we could turn back the clock and watch the trajectory of these Chiropractors’ lives change if I had coached them in school or right after graduation, I could have saved them from trying to do something they were not trained to do. They could have received training to open a practice, form relationships of trust, set up boundaries, and properly educate their patients. I will not be a part of a nine-year college-educated doctor earning less than Wendy’s pay while pretending to be a doctor.

Once you find yourself in a predicament, your pride rears its ugly head and you begin to believe there is no hope. This is the problem because there is hope, most just can’t see it. So many are humiliated, embarrassed, and have spouses and family to answer to. My heart goes out to them, but when they are clearly outside of their comfort zone, they become closed-minded and just give up hope. They can actually become hostile to people trying to help them. They won’t grab for the life raft, even when one was thrown out to them.

Now that they are neck-deep in their dilemmas, they just don’t see the way out. It’s so counterintuitive, but they have to invest more money to become successful. Clean and simple, the Chiropractic degree is no guarantee of success. We all need a whisperer or Miyagi-type person who will stand up to us and for us before we get into such trouble zones. It’s such a different mindset to know how to be successful, rather than only knowing how to be a doctor. This is similar to knowing how to bake cookies but not how to sell the cookies and distribute them.

Giving up, losing your practice, or working for peanuts should not be options for Chiropractors especially when they could have someone worth hiring in their corner. If you want to be adjusted for $19 there are lots of places you can go. If you want to regain your health, you are going to have to understand it will take a major investment on your part. If you don’t invest in a $350,000 dream or don’t think it’s important, what is important in your life? So many people fight for things that don’t matter and don’t fight for the things that do matter. It takes thermal levels of courage and commitment to admit you need help. It takes even more to invest and accept the help you so desperately need. If this article has spoken to you, reach out to me immediately while there’s still time.

← Is It The End Of The Road For Some Chiropractors?Help Is On The Way →